Real Men Wear Pink: KPRC 2 teams up with the American Cancer Society to support the fight to end breast cancer

This fingerprint keypad can make keys a thing of the past

A new MAGA: Mothers Against Greg Abbott mobilizes against the incumbent governor seeking a third term

A little over a year ago, Nancy Thompson, an Austin mother of three kids, stood alone for two and half hours in front of the Texas Capitol with a sign that said “Mothers Against Greg Abbott.”

She was most upset about the governor’s ban on mask mandates, worried about her son who was medically vulnerable to COVID-19 after being hospitalized for another virus that had “infected all his organs,” she said.

“Honestly, I just didn’t give a shit anymore,” Thompson said. “I was just done. I was so done.”

Now, her protests are not so lonely. Her “Mothers Against Greg Abbott” effort has grown into a potent political force in the governor’s race, with a membership of over 50,000 on Facebook. The group has recently caught more attention after releasing professionally made ads that have gone viral on social media.

They have earned the backing of Abbott’s Democratic opponent, Beto O’Rourke, who told the group Monday their work is “the talk of the town” no matter where he is.

“It’s absolutely transforming what’s possible in Texas right now, and there’s literally not a day that goes by that Amy or I or someone on our team do not get asked, ‘Have you seen that great Mothers Against Greg Abbott ad?’” O’Rourke said, addressing the group virtually along with his wife, Amy.

O’Rourke has long had an advantage with women in his uphill battle against Abbott, leading the governor by 6 percentage points among likely female voters in the latest public survey. But Thompson is working to rally a more specific group: mothers like herself, a onetime Republican who did not get deeply involved in politics until recent years. The group has naturally drawn many Democrats, but Thompson wants it to be as inclusive as possible, and its website calls it “a mix of Democrats, Moderate Republicans and Independents who are ready to work together for change for Texas.”

Now Thompson is trying to take the group to the next level for the final three months of the race, organizing chapters throughout the state and endeavoring to put ads on TV. On Monday, it announced it had put up five billboards across the state criticizing Abbott over his response to the Uvalde school shooting.

Campaign finance records show the group raised $170,000 through June 30, garnering over 2,400 mostly small donations. Thompson said the group has raised at least $200,000 more since then, as its ads blew up online in July. That is a notable amount for such an upstart group, though it still pales in comparison to the eight-figure campaign accounts that both Abbott and O’Rourke have to spread their messages.

While the group has been in existence since last year, it has garnered the most attention yet for the ads it has released this summer. One of them, titled “Whose Choice,” depicts a fictitious scence in which a doctor is counseling a woman about a pregnancy she may need to terminate due to a “catastrophic brain abnormality.” The doctor tells her there is “only one person who can make this choice” — before abruptly picking up a phone and calling Abbott. The ad has gotten over 7 million views on Twitter since it was posted July 25.

Thompson is a mother of three from Austin whose professional career has mostly been in marketing. She said she considered herself a Republican — serving as a delegate to the 1988 national convention, for example — until President George W. Bush’s invasion of Iraq in 2003. She began to vote Democratic going forward but did not get more actively involved in politics until more recently.

It was not until after Thompson made her initial protest sign last year that she realized it had carried the same acronym as former President Donald Trump’s campaign slogan: Make America Great Again. But she laughed it off to herself and stuck with it.

Someone took a picture of Thompson’s protest that day, and it started spreading on social media. Noticing how many people seemed to relate, Thompson created a private Facebook group a few days later using the same name, and by December, it had over 20,000 members.

“It just seemed like every single time Greg Abbott opened up his mouth, we gained thousands of followers every single time,” Thompson said. “He just spent the last year making enemies of so many Texans.”

The next year, as the group continued to swell and Thompson was looking for volunteers, she met the filmmaker Michelle Mower. Mower offered to help — and to connect Thompson with fellow filmmakers — and before long, they were all holding weekly meetings.

The group’s first ad, “Breaking Bread,” came out April 15, and it depicted three pairs of women who had been driven apart by politics agreeing to reconcile and hash out their differences. Everyone donated their time for the ad, which cost only $600, covering meals and equipment rentals, Thompson said. It would largely remain that way going forward. 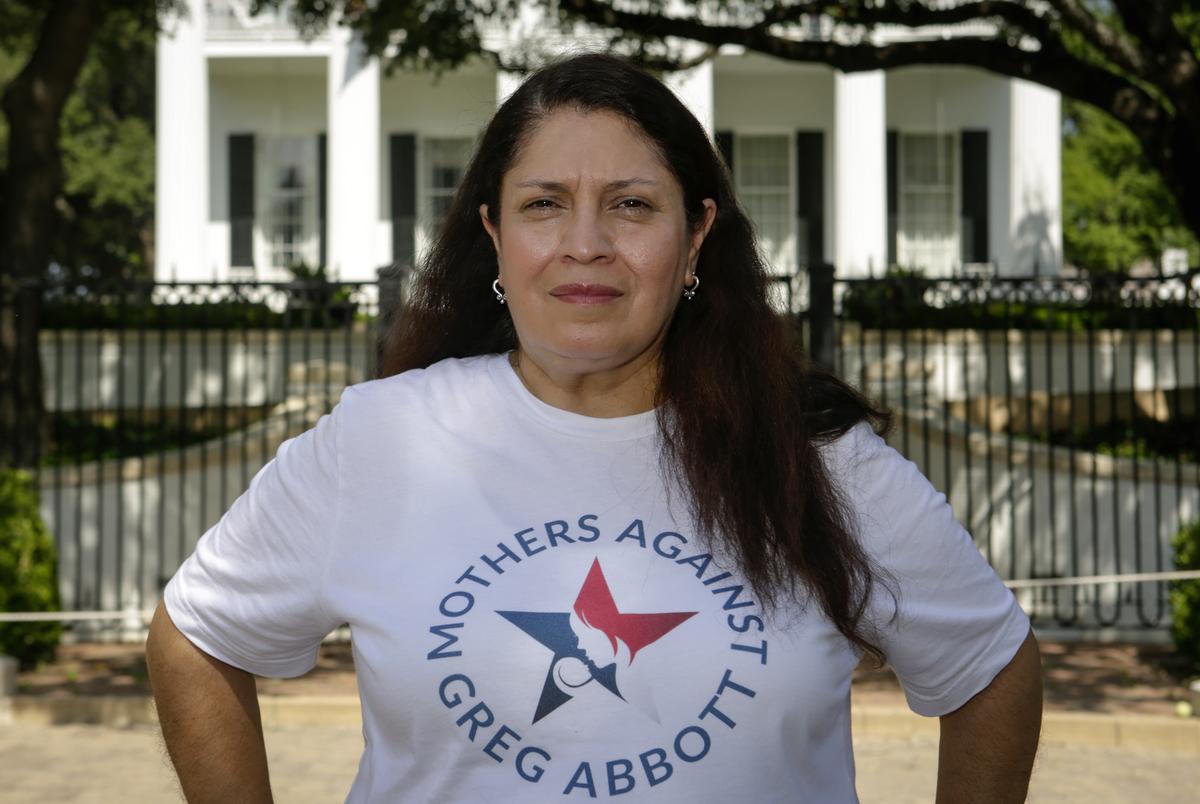 Thompson continued to work with Mower and Chelsea Aldrich, an actress and writer. But she also realized she had a valuable resource next door — literally — in her neighbors, David Wolfson and Lauren Sheppard, co-founders of Spoon Films. The company had worked for a political action committee in 2018 that opposed U.S. Sen. Ted Cruz when O’Rourke was challenging him — Fuck Ted Cruz PAC — and had leftover footage they were willing to share. Spoon Films ultimately produced ads for Mothers Against Greg Abbott featuring Cecile Richards, O’Rourke’s national finance chair and the daughter of former Gov. Ann Richards.

Along the way, Thompson also met fellow likeminded mothers like Cheryl Richard, a retired oil and gas executive from Austin. Richard said she first started talking to Thompson last year when Richard was thinking about challenging Abbott herself.

Richard ultimately provided $3,000 in seed funding to help make an ad called “Nothing Changes,” in which several mothers speak to the camera about overcoming political apathy in Texas. Richard also lent her horse, Ivan, who has a cameo in the ad.

Richard, 66, has twin sons and five grandchildren, with another on the way. Four of her grandchildren are girls. She said she identified as Republican her whole life until “around 2016,” when Trump was elected president and she realized how much the GOP had drifted away from her on some issues. She supports abortion rights and “reasonable” gun control, she said, like raising the age to buy an assault rifle to 21.

“I don’t feel like I left the Republican Party as much as it left me,” Richard said. “I’ve always been a moderate. I’m still a moderate. … And I think there are a lot of moderates out there, particularly women, who feel left behind and for the same reasons I felt left behind.”

Richard acknowledged that beating Abbott is “not just about putting out ads.” The “much tougher” mission, she said, is turning out more voters.

After all, the ads produced by the anti-Cruz PAC garnered plenty of clicks and media coverage, but O’Rourke still lost to Cruz by 3 percentage points.

Thompson appears aware of the challenge. She is working to expand the group’s advertising, filming more ads for the web, hoping to eventually air them on TV, and putting up the billboards, which spotlight Abbott’s statement after theUvalde shooting that it “could’ve been worse.” But she is also helping establish MAGA chapters across the state, including places as far-flung as Alpine in far West Texas and Palestine in East Texas.

The group has grown so much that she recently had to bring on two part-time employees, an accountant and a fundraiser.

While O’Rourke addressed the group for the first time Monday, Thompson has made sure to operate it independently of his campaign, mindful of campaign finance regulations. In fact, Thompson said, it was not until the last week of July that O’Rourke started following her on Twitter.

Disclosure: Facebook has been a financial supporter of The Texas Tribune, a nonprofit, nonpartisan news organization that is funded in part by donations from members, foundations and corporate sponsors. Financial supporters play no role in the Tribune's journalism. Find a complete list of them here.

The full program is now LIVE for the 2022 The Texas Tribune Festival, happening Sept. 22-24 in Austin. Explore the schedule of 100+ mind-expanding conversations coming to TribFest, including the inside track on the 2022 elections and the 2023 legislative session, the state of public and higher ed at this stage in the pandemic, why Texas suburbs are booming, why broadband access matters, the legacy of slavery, what really happened in Uvalde and so much more. See the program.